Jesus, the Magi, and Me 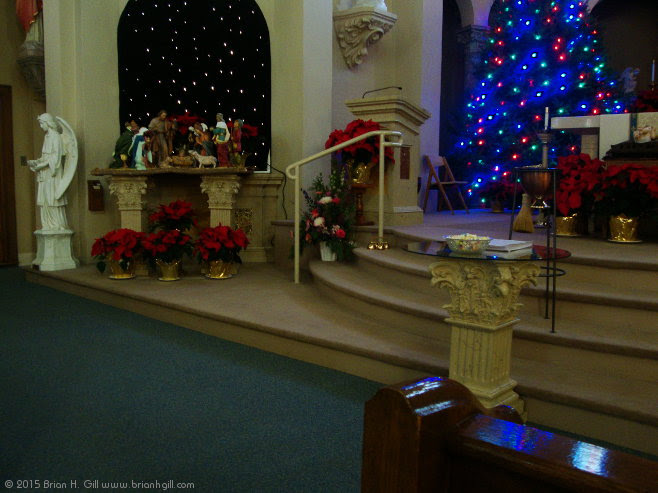 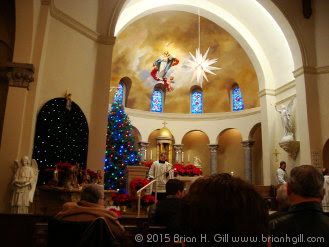 Statues of Caspar, Melchior, and Balthazar started out across from the nativity scene in our parish church.

They were lurking by the poinsettias during Friday's Mass — the Solemnity of the Blessed Virgin Mary, the Mother of God — and no, Catholics do not worship Mary. We're not supposed to, anyway.1

Getting back to the statues, they were in place at the nativity scene when I stopped by with a camera Saturday afternoon. Two look like they're kneeling to the Baby Jesus, the third is bowing slightly.

But Friday they were in front of the altar, by the poinsettias you see in that top photo. Two of them seemed to be crouching behind poinsettia leaves; with the third several paces back, leaning out from behind a plant. It looked like they might be getting ready to yell "surprise!" 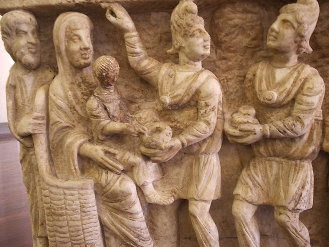 The Magi show up in today's Gospel reading. I'll get back to that.

The reason Epiphany is a big deal for folks like me is in the other bit from the New Testament, Ephesians 3:2-3a, 5-6.2

Here's a longer excerpt from that chapter in Ephesians:

" if, as I suppose, you have heard of the stewardship 3 of God's grace that was given to me for your benefit,

"(namely, that) the mystery 4 was made known to me by revelation, as I have written briefly earlier.

"When you read this you can understand my insight into the mystery of Christ,

"which was not made known to human beings in other generations as it has now been revealed to his holy apostles and prophets by the Spirit,

"that the Gentiles are coheirs, members of the same body, and copartners in the promise in Christ Jesus through the gospel. "
(Ephesians 3:2-3a)

That's why Epiphany and the Magi are a big deal for me. I'm a gentile, descended from folks in northwestern Europe. The reason I celebrate the Messiah's birth, death, and resurrection, is that Jesus came for all nations. (Matthew 28:19; Mark 13:10; Romans 16:25-26)

At the end of all things, I hope I'll be in the "great multitude, which no one could count, from every nation, race, people, and tongue." (Revelation 7:9)

Like I keep saying, the Catholic Church is pretty much the opposite of an exclusive club. We're literally catholic, καθολικός, universal: a united and diverse people, embracing all cultures and all times. (July 19, 2015)

Two millennia later, we know a little more about them, and have educated guesses: and that's another topic.3


"...This Feast of the Epiphany is a very ancient Feast whose origins date back to the Christian East and which highlights the mystery of the manifestation of Jesus Christ to all peoples, represented by the Magi who came to worship the King of the Jews just born in Bethlehem, as St Matthew's Gospel recounts (cf. 2:1-12). This 'new light' that was lit on Christmas night (cf. [Roman Missal] Preface of Christmas I) is beginning to shine on the world today, as the image of the star suggests, a heavenly portent that attracted the attention of the Magi and guided them on their journey to Judea...."
("Solemnity of the Epiphany of the Lord," Benedict XVI (January 6, 2012))

"Know When to Run" 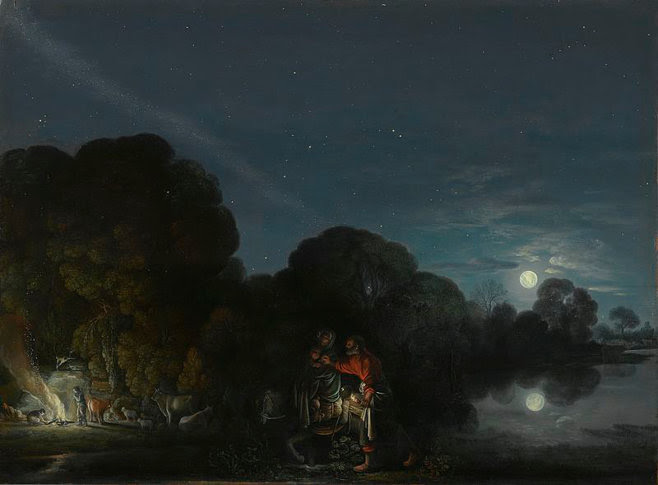 (From Adam Elsheimer; via the collection of Elector Johann Wilhelm of the Palatinate in Düsseldorf,Later in the Mannheim Gallery, photo by The Yorck Project: 10.000 Meisterwerke der Malerei, Wikimedia Commons; used w/o permission)
(Adam Elsheimer's Die Flucht nach Ägypten ("The Flight into Egypt") (1609))

After the magi presented their gifts to our Lord, they were "warned in a dream not to return to Herod," and headed for home by an alternate route. (Matthew 2:12)

That left Jesus, Mary, and Joseph in Bethlehem: which was not a safe place any more.

In 2010, Ken Spino called Herod the Great "a madman who murdered his own family and a great many rabbis." Herod apparently didn't kill off the entire family, since two sons took over after his death.

However, Herod liked being king — even if it was as a Roman client king — and wasn't about to let some upstart take the job. He'd learned from the magi when Jesus was born, research pegged Bethlehem as the place: so Herod sent assassins to kill every boy in Bethlehem under the age of two.

There were a lot of dead kids in Bethlehem that year: but not Jesus. An angel had ordered Joseph to get Mary and Jesus to Egypt ASAP: which he did. (Matthew 2:13-14)

Much later, Jesus ran into trouble with Jerusalem's elite, was executed, and buried in a borrowed tomb. A few days later, he stopped being dead: and that's another topic.


"3 All things came to be through him, and without him nothing came to be. What came to be

"through him was life, and this life was the light of the human race;

More about life, death, love, and all that:
1 Mary is important because she's our Lord's mother. I'll get back to that.

Ersatz 'Mary sightings' and 'face of Jesus in a jar of mayonnaise' events occasionally make headlines: mostly on slow news days, I suspect.

What I run into more often are folks who claim to get messages from Mary. One of them took it up a notch and started saying that he was getting inside information straight from God. For the sake of folks like that, I hope they're sincere.

Catholics do not worship Mary. Putting any creature in God's place is a very bad idea, and we shouldn't do it. (Catechism of the Catholic Church, 2112-2114)


"VENERATION (OF SAINTS): Showing devotion and respect to Mary, the Apostles, and the martyrs, who were viewed as faithful witnesses to faith in Jesus Christ. Later, veneration was given to those who led a life of prayer and self–denial in giving witness to Christ, whose virtues were recognized and publicly proclaimed in their canonization as saints (828). Such veneration is often extended to the relics or remains of those recognized as saints; indeed, to many sacred objects and images. Veneration must be clearly distinguished from adoration and worship, which are due to God alone (1154, 1674, 2132)."
(Catechism, Glossary, V)

I think this quote sums up Mary's role rather well:

3 More about Epiphany and the Magi:

Catholic writing of Romans 1:21 >
"They ... became vain in their thoughts, and their foolish heart was darkened."

Catholic Faith (pre-fulfillment) writing of Deuteronomy 31:21 >
"For I know their thoughts, and what they are about to do this day."

Catholic Faith (pre-fulfillment) writing of Job 21:27 >
"Surely I know your thoughts, and your unjust judgments against Me."

The Catechism is a good starting point: Catechism of the Catholic Church ( www.vatican.va/archive/ENG0015/_INDEX.HTM )

The Vatican also has an increasingly-complete online library of Catholic documents, written over the last two millennia and translated into several languages.