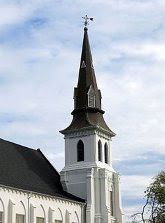 After participating for about an hour, he killed nine of the folks there and left.

I'm angry, and sad, that nine lives were unjustifiably ended in that church: and am profoundly impressed at the reasoned calm shown by some of the victims' relatives.

In my considered opinion, what the young man did was wrong. I'll get back to why I think that's true: and what I'm doing about my anger and sorrow.

"Our Country?" Difference, Acceptance, and Murder 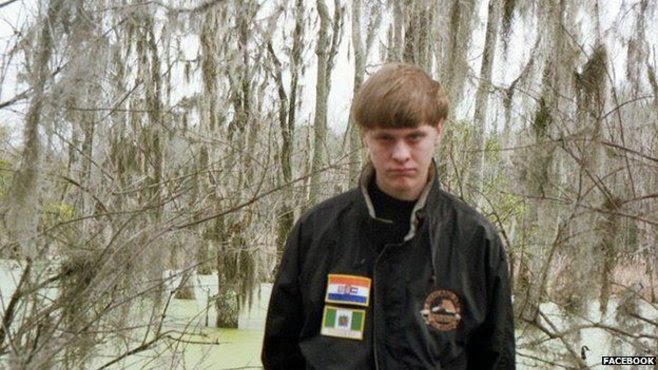 (From Facebook, via BBC News, used w/o permission.)
("Dylann Roof, 21, is suspected of killing nine people at a Charleston church "
(BBC News))


"...NBC News has published an interview with Sylvia Johnson, Pastor Clementa Pinckney's cousin, who said she had spoken to one of the survivors.

"She was told that the gunman 'reloaded five different times' and that the gunman told the victims: 'I have to do it... You rape our women and you're taking over our country, and you have to go.'..."
(BBC News))

There's quite a bit going on here, so please bear with me.

News coverage refers to Mr. Roof as a suspect, and appropriately adds "alleged" and "allegedly" to descriptions of his involvement in Wednesday's mass murder. This is appropriate, since he has not been tried or convicted.

For this post, however, I am making the assumption that he committed the murders. Perhaps further investigation may show that someone who looks like him, with a similar background, killed the folks. I think that is unlikely, but it is possible.

Mr. Roof's complaint is all-too-familiar. It is similar to worries about immigrants that are, I think, older than the United States.

I'm not concerned that 'they' will take over 'my' country — whether the 'they' are descended from slaves brought from Africa, or recent arrivals from other continents.

That's partly because I'm a Norwegian-Irish-Scots-American; who realizes that the ancestors of nearly all Americans lived elsewhere a few centuries, or years, ago.

The situation with the Americans whose church was attacked is different from mine, of course. I 'look Anglo,' despite my ancestry: so we had an easier time blending into the old WASPish America. 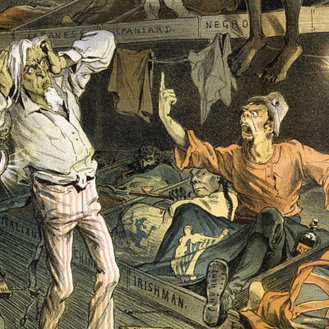 Over the centuries, our government has shown an increased tolerance of non-English, non-Protestant Americans.1 I like the direction we've been going: but not everybody does. (September 11, 2014; February 9, 2014; April 28, 2013)

I've used my Irish roots — or would that be tubers? — as an example of this occasionally-grudging tolerance. Obviously, we weren't the only imagined 'threats' to America, and that's another topic. (September 11, 2014)

Eventually, most Americans realized that many if not most Irishmen were not violent drunkards with criminal tendencies. We've even had an Irish president.

I am reasonably sure that Mr. Roof sincerely feels that folks with African ancestry are to blame for his problems, or at least a serious threat to him.

Even if that were true — and I am certain that it is not — his imagined grievance did not justify his decision to kill those folks.

Murder, deliberately killing an innocent person, is wrong. (Catechism of the Catholic Church, 2268-2269)

The prohibition against murder does not extend to legitimate self-defense. (Catechism, 2263-2267)

But Mr. Roof had not been physically threatened by his victims, his life was not in danger, and he certainly had options other than killing them. What he did was wrong.

Looking Out For Each Other 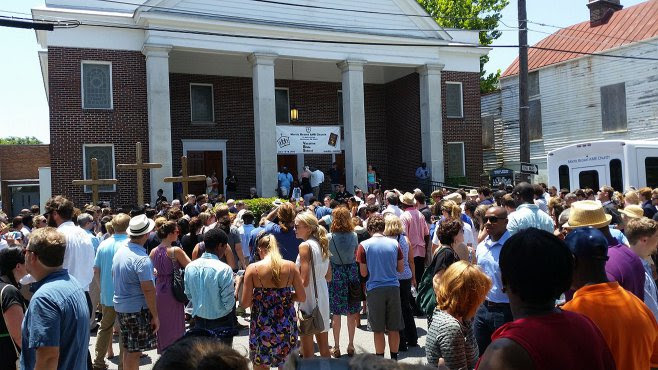 I've read speculation that Mr. Roof's goal was to start a 'race war.' That would be a very bad idea: and uncomfortably similar to genocide, which is strictly against the rules. (Catechism, 2313)

If that is his goal, I do not think he will succeed.

Certainly not if folks at a prayer vigil at Morris Brown African Methodist Episcopal Church are any indication. That's a photo of part of the crowd, taken June 18, 2015.

Today's America is not New York City in 1863 (some Irishmen were occasionally violent) or Los Angeles in 1965.

Most of us very strongly disapprove of killing folks in a place of worship — no matter who their ancestors are.

That may help explain why Mr. Roof was found so promptly.

His description, and images from a security camera, were broadcast. The next morning someone working in Shelby, North Carolina, spotted him. That's about 245 miles/395 kilometers from Charleston. She told her boss; who contacted local law enforcement. (BBC News, Wikipedia)

That sort of solidarity is how we're supposed to act. (Catechism, 1939) 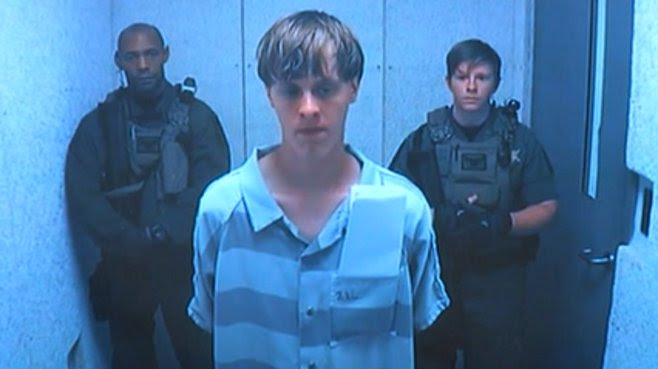 (From BBC News, used w/o permission.)
(" 'Everyone's plea for your soul is proof that they lived in love and their legacies will live in love. So hate won't win', a relative of one victim told the suspect"
(BBC News))

"Relatives of some of the nine churchgoers shot dead in South Carolina have addressed the suspected gunman in court and said they forgive him.

"He showed no emotion as relatives of the victims addressed him directly. 'I forgive you' said one victim's daughter, fighting back tears.

"Police are treating the killings at the African-American church on Wednesday night as a hate crime...."

My native culture assigns high value to the social position of some victims — a state senator, three ministers, a church sexton, and four Bible study members — lesser value to others:
I draw some comfort from knowing that kinfolk of the victims did not forget their faith: and have the strength to forgive someone who has so deeply wounded their family.

Forgiving someone is not the same as pretending that an injustice never happened. That would be crazy. Respect for the "transcendent dignity" of humanity demands that we work for justice. The trick is hating the sin — not the sinner. (Catechism, 1929-1933, 2820)

I've heard withholding forgiveness described as drinking poison — and expecting the other person to die. That may be why our Lord emphasized forgiveness so much:


"11 And he said to them, 'Thus it is written that the Messiah would suffer and rise from the dead on the third day

"and that repentance, for the forgiveness of sins, would be preached in his name to all the nations, beginning from Jerusalem.

"You are witnesses of these things.

I talked about the Shavout we celebrate each Pentecost last month. (May 24, 2015)

"Simple" isn't "easy," though. We call the folks with the heroic virtue it takes to live as if those principles matter "Saints," and that's yet another topic. (April 19, 2015)

The sort of love that's required can't be safely abstract. I must act as if what I believe matters. My concern for justice, for example, can't stop with my family or folks who look like me. Our Lord's story about the Samaritan makes that clear.

Judging from headlines and enraged online rants I've seen, many folks realize that killing those folks in Charleston was very wrong. That's true, and anger is a natural reaction. But we're supposed to think.

Emotions can indicate that something requires attention. After that, my job is using reason to decide what I should or should not do. (Catechism, 1763, 1765, 1767)

That's the way it's supposed to work, anyway. I have free will; so acting on my impulses, letting emotion rule my life, is an option — and a very bad idea.

So: how am I handing the anger and sorrow I feel, knowing that nine lives ended because a young man apparently let his anger run loose?

My emotional response helped me pay attention to what was happening in South Carolina. The next step was thinking about how I should respond.

I can't help the folks involved, not directly. But prayer is always an option.2

I can also try to remember that emotions are part of being human, but that we're expected to use our brains — and think about what is true and good, and what is not. (Catechism, 1954-1960)

That will help keep me calm enough to appreciate my family, and this continuing gift we call life.

Charleston, South Carolina, has a history of tolerance — which has been improving with time. Catholics, for example, are now allowed to openly worship there.


"...Why did Jews become such a significant group in seventeenth-century South Carolina? What brought them to a colonial port? The Rosengartens point to the 'Fundamental Constitutions of 1669,' a document drafted by Enlightenment philosopher John Locke (then the private secretary to Anthony Ashley Cooper, one of the colony’s 'Lords Proprietors,') that granted the right of people of any religion—except Catholics—to form a church. This was not necessarily a friendly act of pluralism, Dale notes: 'They put that in because the thought was that if you let these people into society, they would see the light and convert.' Though never enacted, the document expressed the intent of the authorities to allow 'fringe' groups like the Jews and the French Huguenots, both successful mercantile groups in diasporas at the time, to settle in the fledgling Charles Town. 'It was a business decision,' she believes. 'They were looking for settlers who would be strong economic contributors.'..."
("A 'portion of the People'," Nell Porter Brown, Harvard Magazine (January-February 2003))
"...The itinerary also includes less well-known churches which represent the spiritual diversity that the city was built upon, such as the Emanuel AME Church, the oldest African Methodist Episcopal church in the South, First Scots Presbyterian, established in 1731 by 12 Scottish families, and St. Mary's, the first Roman Catholic Church in the Carolinas and Georgia...."

"...While the earliest settlers primarily came from England, colonial Charleston was also home to a mixture of ethnic and religious groups. French, Scottish, Irish and Germans migrated to the developing seacoast town, representing numerous Protestant denominations, as well as Catholicism and Judaism. Sephardic Jews (of Spanish and Portugese ancestry) migrated to the city in such numbers that Charleston became one of the largest Jewish communities in North America....

"...Although South Carolina's religious freedom (for all non-Catholics) attracted many Dissenters, the Church of England was the established church after 1706...."
("Charleston's Historic Religious and Community Buildings," National Park Service, Department of the Interior)

2 No pressure, but prayer couldn't hurt — and remembering the big picture.


"Eternal rest grant unto them O Lord; and let perpetual light shine upon them."
(Eternal Rest/Requiem Æternam)
"For if we live, we live for the Lord, and if we die, we die for the Lord; so then, whether we live or die, we are the Lord's."
(Romans 14:8)