Remembering 9/11, Living in a Big World 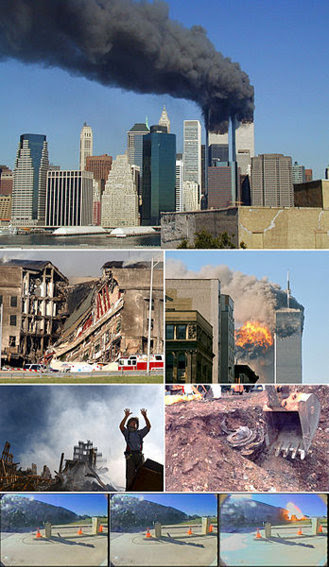 About 3,000 folks died in attacks on New York City's World Trade Center and the Pentagon on this date, 13 years ago.

The death toll would almost certainly have been higher, if passengers and surviving crew of United Airlines Flight 93 had not attacked their hijackers. They died, probably because the Al Qaeda pilot deliberately flew into the ground.

Depending on their views, folks have commemorated the 9/11 attacks in many ways.

Some have declared that the attacks were justified, because America is a big meany. They usually express the idea in more sophisticated terms, of course.

Others say that Muslims are to blame: all Muslims. Still others take the more sweeping view that all religion is to blame.

I think there is a tiny element of truth in 'all of the above.'

Al Qaeda's leader at the time, Osama bin Laden, almost certainly had sincerely-held religious beliefs: and chose American targets in response to this country's profound lack of fidelity to his brand of Islam.

I like being an American, and am still upset that so many folks were killed by religious fanatics. But I am not going to rant about folks who don't follow my faith: or those who do, and behave badly.

Instead, I'm going to take a look at how some — but happily not all — Americans have reacted to Catholics, Jews, blacks, and other 'threats' to my country. 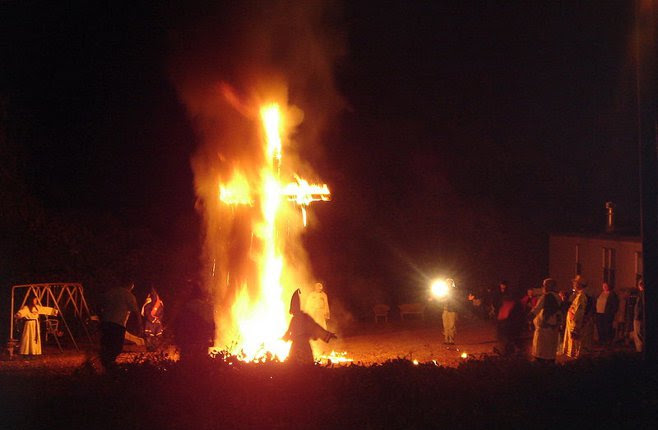 (From Confederate till Death, via Wikimedia Commons, used w/o permission.)
("Ku Klux Klansmen and women at a cross lighting in on November 12th, 2005."
(Wikimedia Commons))

Father James Coyle's execution in 1921 was, by some standards, justified. Hours before his death, he had performed a wedding between a Ku Klux Klan member's son and a Puerto Rican.

Considering this country's anti-Catholic traditions, though, for the most part we've been treated rather well here. 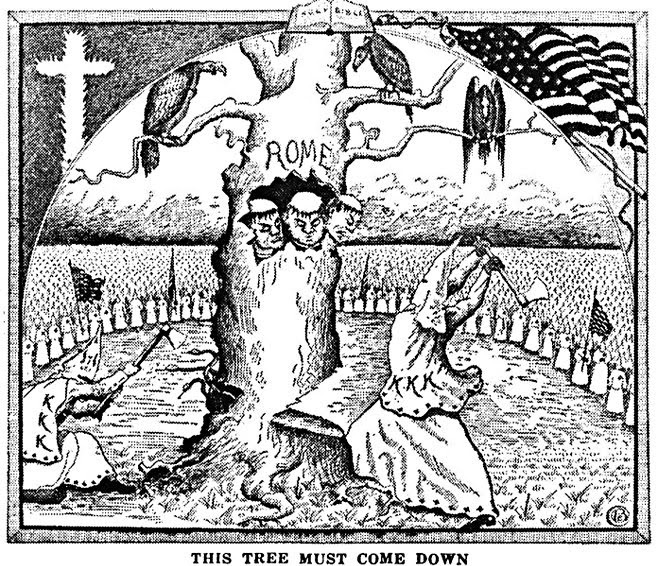 (From From Buz lightning, via Wikimedia Commons, used w/o permission.)
("Branford Clarke illustration in The Ku Klux Klan In Prophecy 1925 by Bishop Alma White published by the Pillar of Fire Church in Zarephath, NJ"
(Wikimedia Commons))

Living in a Big World


Members of the Ku Klux Klan aren't, of course, the only folks in America who feel threatened by those who the 'right' sort. But over the generations, they've been among the more prominent advocates of 'old fashioned values' in this country. They're also among the reasons I don't miss the 'good old days.' (February 12, 2012)

Maybe it's obvious, but — the KKK doesn't include all American Protestants, not all Catholics commit murder or genocide, and not all Muslims are terrorists. I've been over this, mostly in another blog:
Happily, more folks are realizing that we live in a big world: and that living among folks who aren't all alike is okay.


I gather that Al Qaeda and other violent Islamic groups don't like today's world. I can sympathize with that attitude, in a way. I'm not at all happy about many of the unethical standards accepted by contemporary Western culture.

I certainly do not think that bombing a federal building (1995), or an Olympic park (1996), is a reasonable response to America's unresolved issues. And killing folks at a Sikh gurdwara is wrong on several levels. (August 9, 2012; August 10, 2012)

Even though I am not personally connected with the 9/11 attacks, and 13 years have passed, I am still very unhappy and angry that Al Qaeda deliberately killed so many innocent people.

That said, I must not hate those who committed these acts. I am convinced that what they did was wrong: but hating anyone is also wrong. (December 9, 2010)

I am a Catholic, so I must take what my Lord said seriously. We are all expected to:


Finally, here's something I wrote about faith and freedom, three years ago:

Religious Freedom: For Us; For 'Them;' For Everybody


I've discussed 'why the rights of Muslims matter to this Catholic' before. Aside from thinking that 'my end of the boat isn't sinking' isn't a sensible attitude - I have to care about religious freedom. (Catechism of the Catholic Church, 2104-2109)

So far, that's not very impressive. Most folks with religious beliefs believe that they should be free to worship as they see fit. In a way, that's what the war on terror is about: Al Qaeda wants to worship they way they see fit, and make everybody else follow their lead.

More of what I think about living in: