Our granddaughter's baptism was yesterday, which was a very happy occasion. We had a few folks over to celebrate, so my quiet Saturday afternoon was anything but.

As a result, this post may be less organized than most: which is saying something. 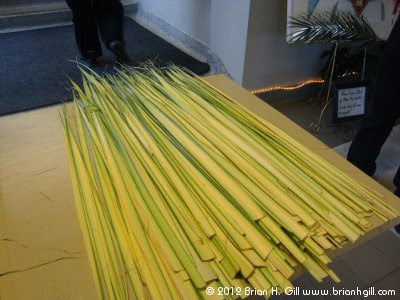 It's Palm Sunday, when Christians remember Jesus' enthusiastic welcome in Jerusalem: followed by equally-enthusiastic cries of 'crucify him!'

We'll be holding palm fronds and reading parts of Matthew 21:1-11; Matthew 26:14-27:66 this morning. I enjoy echoing the crowd's hosanna. What comes after that isn't much fun: even though I know what happened on the first Easter.

"Hosanna" is what "הושע נא" sounds like after folks speaking a Germanic language read Greek and Latin versions of an Aramaic/Hebrew word, and that's another topic. In today's context, hosanna means something like save, rescue, and maybe savior. Some of the folks in Jerusalem understood at least part of who and what Jesus is. (Catechism of the Catholic Church, 559)


Sin, Guilt, and the Kingdom of God 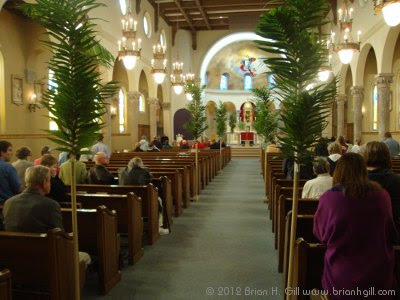 Jesus' entry into Jerusalem was, for folks paying attention, the start of the kingdom of God that my Lord had announced. Then as now, some folks liked the status quo: and got in the way. (Matthew 4:17, Matthew 27:1)

For anyone else, a public execution followed by internment in a borrowed tomb would have been the end. It took Jesus several meetings to convince the surviving apostles that they weren't seeing a ghost, and I've been over that before. (March 11, 2012)

Sin and guilt are tricky concepts. They're real, and can be undervalued: or seriously misrepresented. We're not supposed to writhe in anguish and despair over our sins. Recognizing our faults, asking forgiveness, and correcting our shortcomings: that makes sense. (Catechism, 1846-1869)

Recognizing the other guy's faults is often easier: and not necessarily a bad thing. We're supposed to use good judgment. Being 'judgmental,' acting as if it's our job to condemn 'those sinners over there' to everlasting fire? That's a really bad idea: and against the rules. (Catechism, 1861)

I don't enjoy some parts of our Palm Sunday reenactment: I'm too aware of my personal contributions to humanity's guilt.


"Of the House and Family of David"

Laying our guilt for my Lord's crucifixion on "the Jews" is also against the rules: and, in my considered opinion, a really bad idea.

I've run into folks with more-or-less anti-Semitic attitudes. I can almost understand these feelings among those on the other side of the Sara-Hagar domestic dispute. We're still dealing with fallout from that incident, and that's yet another topic.

Gentiles, like me, whose ancestors were on the far side of nowhere when Abram moved out of Ur? Particularly those of us who are Christians? Anti-Semitism makes no sense: not to me. But then, I know what "of the house and family of David" means. 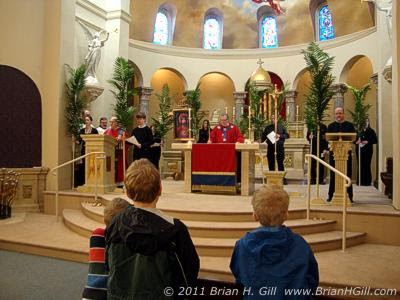 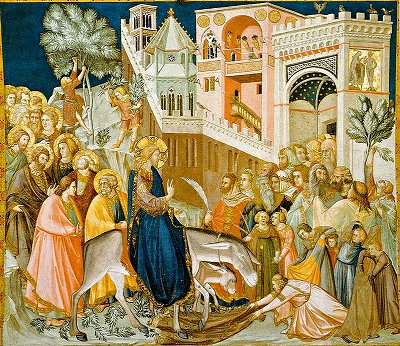 (From Pietro Lorenzetti, via Wikimedia Commons, used w/o permission.)
(Fresco in the Basilica of San Francesco d'Assisi.)

Palm Sunday is above freezing here in central Minnesota this year, last year we had a lovely blanket of snow: but the parish church has a supply of palm fronds each time Palm Sunday rolls around.

My household weaves our palm fronds into lanyards with a sort of St. Andrew's Cross at the end. I'll probably set mine near my desk again this year. Later, they'll be burned outside the parish church: making ashes for Ash Wednesday.

That fresco is nearly seven centuries old, in the Basilica of San Francesco d'Assisi. I'm more amused than upset that some of the buildings in Saint Francis of Assisi's old headquarters are a bit opulent. And that's yet again another topic.

My Lord gave us orders we're still following, with varying degrees of success:


"11 Then Jesus approached and said to them, 'All power in heaven and on earth has been given to me.

"Go, therefore, 12 and make disciples of all nations, baptizing them in the name of the Father, and of the Son, and of the holy Spirit,

Two millennia later, 'love God, love your neighbor, everyone's your neighbor' are still a good ideas: and they still threaten folks who enjoy unjust benefits from the status quo.

We've made a little progress in the last 20 centuries. Ancient evils like prostitution and slavery are illegal in several parts of the world: and, perhaps more importantly, unfashionable.

I could see the glacial pace with which "love our neighbor" has been taught as a dreadful disappointment; or job security. And that's — you guessed it — still more topics.

Email ThisBlogThis!Share to TwitterShare to FacebookShare to Pinterest
Labels: being Catholic, Easter, getting a grip, guilt, Jesus, sin