"Waking Up Catholic," a Guide to Catholic Beliefs 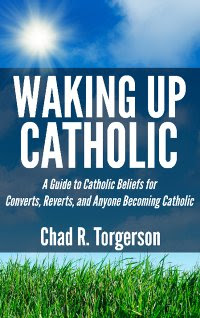 Maybe 'you can't judge a book by its cover, but the subtitle of "Waking Up Catholic," "A Guide to Catholic Beliefs for Converts, Reverts, and Anyone Becoming Catholic" accurately sums up Chad R. Torgerson's book.

More accurately, it will be. It's "coming soon in ebook and paperback" from Assisi Media. I got a pre-publication copy.


"...You do not have to worry about learning complex theological ideas; we are going to work our way from the ground up. We will start with a strong foundation and build from there. By the end of the book, you still may not be a theological scholar, but you will know what it truly means to be Catholic...."
("Waking Up Catholic," Chad R. Torgerson)

After reading the book's 115 pages, I think Torgerson makes good on that promise.


Learning the Basics, Thirsting for More

Torgerson weaves an account of his search for a faith that matters into discussions of Catholic beliefs.


"... My Protestant faith meant everything to me, so there is one thing I never dreamt of: waking up Catholic. I never thought that my life would lead me to the Catholic Church...."
"... Theology is a matter of the mind, but faith is a matter of the heart. With that in mind, my goal is to teach the basics of the faith in a way that is easy to understand - yet still pulls at your heart strings. Your mind will grasp the information, and your heart will thirst for more...."
("Waking Up Catholic," Chad R. Torgerson)

Despite saying that he wants to pull at your heart strings, Torgerson focuses on what being Catholic means: not sentimental excursions.

Considering how much material Torgerson covers, that's a good idea.

Chad R. Torgerson explains why the Catholic Church is important, and has been for two thousand years. "Waking Up Catholic" walks the reader through explanations of Church teachings, showing where we get our beliefs about:
Torgerson quotes from documents like "New American Bible," "Catechism of the Catholic Church for the United States of America," "United States Catholic Catechism for Adults," and "The Roman Missal."

In the last chapter, Chad R. Torgerson points out that apologetics, defending the faith, is not evangelizing. When we evangelize we should be "lovingly sharing it with others,"

A key word there is "lovingly." It's not enough to just understand the reasons we believe. That's important, but Torgerson says we need "...to take our faith outside of the parish walls and into the world...."


"...We are not Catholic by birth or because our parents and family are Catholic. We are Catholic because we live out our beautiful faith in our everyday lives. We understand why we have a pope, venerate Mary, love the saints, and pray the Rosary. We do not simply follow rituals; we actively participate in the greatest religion in the world. ..."
("Waking Up Catholic," Chad R. Torgerson)

Notes From a Recovering English Teacher

Some students were struggling with spelling and grammar, some were learning how to organize ideas, and some were already writing clear, concise, and coherent papers. I hope they looked at the papers I returned, read my notes, and kept improving their skills after the courses ended.

Some well-intentioned authors write books that are anything but clear, concise, and coherent. I've reverted to 'English teacher' a few times, marking books as if I was reading someone's classwork.

I didn't know what to expect when I started reading Chad R. Torgerson's "Waking Up Catholic."

Happily, "Waking Up Catholic" is a well-written book.