Elijah and the 12-Star General

Tomorrow's post is about death, judgment, Heaven, Hell, and all that. Coming back from a desperately-needed coffee break, I realized that the following paragraphs made sense, in context — probably. But since I didn't have the rest of the post written yet, I figured it'd be easier to slap them into an 'unscheduled' post, and cudgel my brain back on-track. 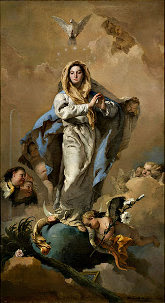 Then there's Mary, mother of my Lord. She's a very special case: shielded from original sin, the ethical rot we inherit from our first parents; and currently what I've called a 12-star general.

There's a difference of opinion about how Mary made the transition to life, version 2.0. I'm (Roman) Catholic, so I help celebrate the Feast of the Assumption each August 15.

Other Catholics celebrate the Dormition of the Theotokos on the same date. Wikipedia discusses "Assumption vs. Dormition" in their page on the Assumption of Mary.

I'm enough of a scholar to appreciate that whether Mary died and was resurrected shortly thereafter; or seemed to be dead, wasn't, and was taken directly to God's kingdom; is a significant question.

But I'm also a Norwegian-Irish-Scots-American — so I also think the important point is that Mary is alive, and has been doing what we'd call diplomatic work for at least part of the last two millennia.

You've probably heard about the incidents at Lourdes and Guadalupe. News of Mary's appearance at Champion, Wisconsin, isn't quite as high-profile. Not yet, anyway, and that's another topic.

Catholics don't worship Mary. She's as human as I am. We do, however, recognize the guts and endurance her life experiences demanded: and recognize her as a Saint, someone who displayed heroic virtue.