I'm a Christian. More specifically, I'm a practicing Catholic. That means that, among other things, I don't have to studiously avoid believing things that folks have learned since 1277, when Proposition 27/219 went into effect.

and the things of faith

Watching television yesterday morning, I ran into an all-too-familiar set of assumptions about science, religion, and Christians.

It was a science fiction show, involving space aliens and an invasion of Earth. Think "Invasion of the Body Snatchers" meets "Contact." The story depends on the idea of life existing on planets other than Earth.

Very early in the story, one of the major characters told another that people had started committing suicide after they learned about space aliens.

The 'alien invasion' plot stopped dead in its tracks as the actor discussed a Christian's untimely demise.

Faced with real, live, space aliens: she could no longer cling to her 'narrow-minded' beliefs. She said that science was right, after all.

Then she killed herself.

The scriptwriters gave the actor more to work with than that, but you've got the gist of it.


Science, Faith, and Getting a Grip

The BBC program came to my household via our cable service. From this, I could conclude that the following are 'Satanic:'
My faith isn't of the 'everything I don't like is Satanic' variety, so I see that bit of 'religion opposes science' drama as more of the same silliness I've seen for decades.

Assuming that all Christians are like Fred Phelp's "God Hates You" bunch, or are ardent disciples of the latest 'End Times prophecy,' isn't valid. I don't even think loud, colorful, folks like that are typical of American Protestants.

On the other hand, I've run into quite a few less-wacky folks who are Christians, and are convinced that science is some kind of plot.

Whoever wrote that BBC script may have been sincere, too. In some circles, it's easy to believed that Christians are, by definition, psychologically fragile ignoramuses.

Suicide is a bad idea, by the way: in part because being dead really limits a person's options. I've been over this before:
Moving on.

Speculation about other worlds was a hot topic in the year 1277. Then, as now, some folks loudly insisted that God followed their preferences about how the universe worked.

That's when the bishop of Paris, Etienne Tempier, issued Proposition 27/219. Basically, the bishop said that Catholics must not claim that God couldn't have made more than one world like Earth. He didn't put it quite that way, but I think that's a reasonable summary. As far as I know, Proposition 27/219 hasn't been rescinded, and I've been over this before. (September 2, 2011)

Dialog in that BBC show did have one nifty idea: the mental image of a 'YOU ARE HERE' map of the universe. I thought it was so nifty, I made my own: 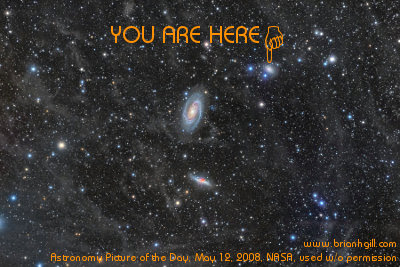 My response to that sort of thing isn't suicidal thoughts. (Yes, I've had them.) It's more along the lines of Psalms 19:


"The heavens declare the glory of God; the sky proclaims its builder's craft."
(Psalms 19:2) 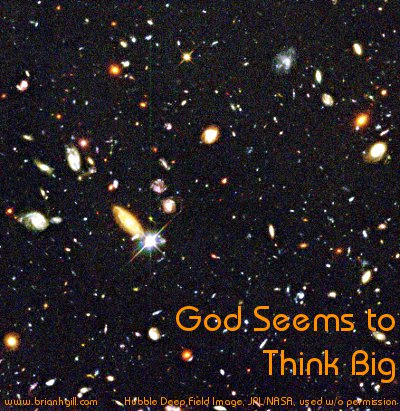 That quote about "the things of the world and the things of faith" is from a paragraph in the Catechism. Like I said, I'm a practicing Catholic: so I don't have to ignore what we're learning about God's creation:


"Faith and science: 'Though faith is above reason, there can never be any real discrepancy between faith and reason. Since the same God who reveals mysteries and infuses faith has bestowed the light of reason on the human mind, God cannot deny himself, nor can truth ever contradict truth.'37 'Consequently, methodical research in all branches of knowledge, provided it is carried out in a truly scientific manner and does not override moral laws, can never conflict with the faith, because the things of the world and the things of faith derive from the same God. The humble and persevering investigator of the secrets of nature is being led, as it were, by the hand of God in spite of himself, for it is God, the conserver of all things, who made them what they are.'38"
(Catechism of the Catholic Church, 159)

Related posts:
Background (not even close to everything the Church has to say on the subjects):
More:

Household's what? "The BBC program came to my household's via"

Found, fixed, and thanks!