Next Monday is World Refugee Day. It's a United Nations-sponsored set of events:

"For years, many countries and regions have been holding their own Refugee Days and even Weeks. One of the most widespread is Africa Refugee Day, which is celebrated on 20 June in several countries.

The UN General Assembly, on 4 December 2000, adopted resolution 55/76 where it noted that 2001 marked the 50th anniversary of the 1951 Convention relating to the Status of Refugees, and that the Organization of African Unity (OAU) had agreed to have International Refugee Day coincide with Africa Refugee Day on 20 June.

"The General Assembly therefore decided that, from 2001, 20 June would be celebrated as World Refugee Day...."

No rant about the spider-flag of the United Nations, or how the organization can't be trusted because it's full of foreigners.

I'm no great fan of the United Nations. The organization has problems. Some of them are major. But I also think that President Roosevelt and others had the right idea, back in 1942. The U.N. is, among other things, a way for national leaders to settle their disputes. Without killing each other's subjects.

We're a very long way from having an "international authority with the necessary competence and power" to simply arrest someone like Saddam Hussein. (Catechism of the Catholic Church, 2308)

Until we have something like Tennyson's "Parliament of man, the Federation of the world," we'll have to make do with the United Nations. Or go back to the 'good old days' that led to the 'war to end all wars' - and the war after that one. (March 22, 2011)


Working With People - As They Are

My Lord wasn't all that particular about who He associated with. (Matthew 9:10) which helps explain why the Holy See has a long history of working with folks who weren't Catholics - or Christians. (October 28, 2010)

The Holy See has diplomatic ties with the United Nations, and the United States: We've got a long, long history of dealing with folks where they are now, instead of waiting until 'they' are 'ready.'

Now, something much closer to home.


Minnesota: Not For Everybody

I live in a small town in central Minnesota: and love it here. The climate, I'll grant, isn't for everybody. As a fellow said, discussing the 1964 Futurama II exhibit:

"...then consider living in Antarctica. Yes, you too can take up residence in a barren desert of ice and snow where it's dark six months of the year and blizzards howl as they blast flesh-cutting shards of ice through the subzero air.

That's an exaggeration. Minnesota doesn't have a real desert - that sort of biome starts south and west of here - and we're well south of the arctic circle, so the sun is up for a few hours even in mid-winter.

Still, Minnesota's climate may not be for everybody. 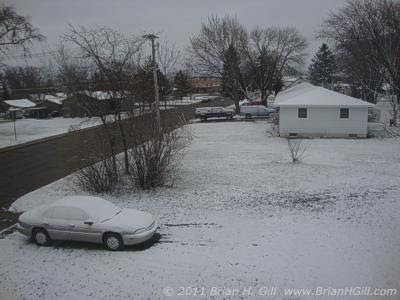 Why are so many Minnesotans first- and second-generation immigrants from Somalia?

It's not the climate: it's the jobs. Minnesota is a major poultry producer. If you live in America, the odds are pretty good that your Thanksgiving turkey came from a farm in Minnesota. All those birds have to be processed and packed before getting shipped, and you don't need to know much English to handle work in a poultry plant. (Another War-on-Terror Blog (December 4, 2008))

I think it's great that America is still in the list of places that refugees decide is better than where they grew up. Partly because I like to see folks having opportunities to grow and prosper; partly because I think this country gains something every time a family with get-up-and-go moves in.

But then, I'm a descendant of immigrants: so I would say that.


Local, Universal, and Everything Between

If this post doesn't sound "conservative" - or "liberal" - that's because I'm neither. I'm a practicing Catholic. (November 3, 2008) I've written about my conversion before.

I am part of an organization that is literally "universal," and as local as the parish church down the street. The rules say I'm supposed to love God and love my neighbor. And the Church teaches that everybody is my neighbor. (Matthew 5:43-44; Mark 12:28-31; Luke 10:25-30; Catechism of the Catholic Church, 1825)

I've got more to say about Minnesota, neighbors, and getting a grip - but it's getting late and I have chores to do. Maybe tomorrow.