Smashed Statues: An Opportunity for Prayer and Charity

This could have been a lot worse.

Nobody was hurt, that we know of; nobody was killed; a regional television station posted a 'donate' link; and the county sheriff is treating vandalism at the Mother Cabrini shrine in Golden, Colorado, as a crime.

It could be better, too. As of November 22, 2010, Jefferson County law enforcement says there are no clues and no leads.

And, of course, it'd be nice if somebody hadn't smashed those statues.

"A spokesperson from the Mother Cabrini Shrine in Golden, Colo. said the local community is frustrated and grief-stricken over the shrine being vandalized the night of Nov. 14.

"Jeff Lewis, administrator at the Mother Cabrini Shrine, reported that four statues were damaged Nov. 14 in an attack that has offered no possible suspects or motivations.

" 'Our maintenance guys found the broken statues on Monday morning, Nov. 15,' he told EWTN News via e-mail. 'I closed the gate the night before, making sure everyone was off the property before the gate closed, and everything looked fine.'

"It was discovered the next morning that a three-foot tall statue of St. Bernadette was knocked off its pedestal and broken in half, a three-foot statue of Our Lady of Grace was found toppled over with its head broken off, and a five-foot statue of Mother Cabrini had its 'face smashed in,' Lewis recounted on Nov. 22.

"He also said a large crucifix at the bottom of the Shrine's Stairway of Prayer was damaged, with a broken face and toes. Someone 'must have beaten' it 'with force,' he said...."

Note about the language: In American English, "guy" doesn't have the connotations it does in England, after the 'Guy Fawkes' thing. I'll be getting back to that.

There's more about the statue-smashing, from a secular American point of view, at a Denver ABC station's website:They're the ones with a link to the Mother Cabrini shrine's website: www.mothercabrinishrine.org.

I mentioned Guy Fawkes a little earlier. He achieved lasting fame for not quite succeeding in blowing up the British Parliament. He and the other conspirators were Catholic, the Parliament was largely Protestant, and this is not the way to leave a good impression.

The BBC had a pretty good backgrounder on the matter, earlier this month:Before reading that, I suggest recalling that Thomas Percy, Guy Fawkes, and the rest of that lot were not the only Catholics left in England in 1604. Also, that there's little reason to assume that Catholics in England were all involved in the effort to whack Parliament.

There's another discussion of the Gunpowder Plot in a Catholic Encyclopedia article at New Advent. It's not exactly complimentary, in reference to Fawkes and company.

Then there's Oliver Cromwell. I've discussed the Lord Protector before.

My take on killing people you don't agree with, smashing statues, burning books, and claiming divine authority for doing so? The 'kill a commie for Christ' attitude isn't new, isn't limited to American Protestantism, and isn't a good idea. At all. 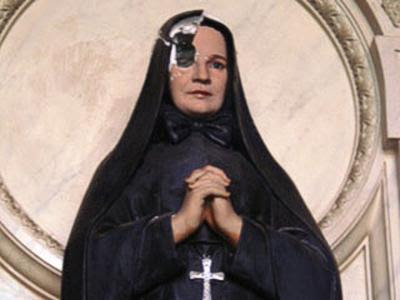 What are Those Cabrini People Up To?

Skipping lightly over 'Cabrini' not being a 'regular American' name - I think most folks in this country have come to terms with the idea that America isn't predominantly Anglo-Saxon anymore - the Mother Cabrini shrine's website has a mission statement on the home page:

"At Mother Cabrini Shrine in Golden, Colorado, the Missionary Sisters of the Sacred Heart of Jesus and their lay collaborators strive to bring the love of Christ to pilgrims, visitors and friends through a hospitable and prayerful presence. The Sisters, founded by St. Frances Xavier Cabrini, direct all programs and ministries at Mother Cabrini Shrine. The staff, religious and lay, seek to bring God to people and people to God."
(www.mothercabrinishrine.org)

There's a description of the 'Stairway of Prayer,' too:

"In 1954 a twenty-two foot statue of the Sacred Heart of Jesus, carved by an Italian artist was mounted on an eleven foot base and erected above the Heart of Stones. ... The stairway follows the path Mother Cabrini, the sisters and the children took to the top of the mountain. This stairway following the Saint's footsteps is also symbolic of the pathway Christ took on His sorrowful way to His crucifixion and death, through the stations of the Cross...."

Statues, Prayer, Stations of the Cross, and Hate

With my background, I can see how that Stairway of Prayer would infuriate some folks. Between what some academics feel is the "self-satisfied ignorance" of religious belief (Another War-on-Terror Blog (August 5, 2008)), and what Catholic-haters may think is idol worship - well, there's a lot of hate in this world.

There are a lot of good folks, too - and it seems that a fair number are helping the Mother Cabrini Shrine clean up the damage. As I've said before, money isn't everything: but it sure helps get things done.

Prayer's a good idea, too. For the folks running the shrine. And, perhaps more importantly, for whoever smashed those statues. With that much anger leaking out, I think it's likely that someone could use help.

So could we all, for that matter. And that's a whole bunch of other topics.

I think there are supposed to be two 'l's: "I suggest recaling that"

And two of these words should be one: "predominantly Anglo-Saxon any more"