My father-in law has been asked, from time to time, if he's conservative - or liberal. His answer: "I'm Catholic."

I'd give the same answer.

Catholic teachings are quite definite, so it's possible to peg them on the American political spectrum. As long as you don't look at the big picture. By taking bits and pieces of Catholic beliefs, and the history of Catholics in America, it's 'quite clear' that Catholics are: I think that Catholic loyalty to the Democratic party has been eroding, as more of us catch on that the party of the Kennedys and Nancy Pelosi isn't the party of Al Smith and FDR.

The Election's Tomorrow: So I Prayed

Sitting in a quiet room and 'doing nothing' a day before a critical election may seem like an odd thing to do. Particularly for a citizen who cares deeply about issues that will be decided.

But, around 3:00 p.m. today, I was in the Adoration Chapel behind St. Paul's Church in Sauk Centre. 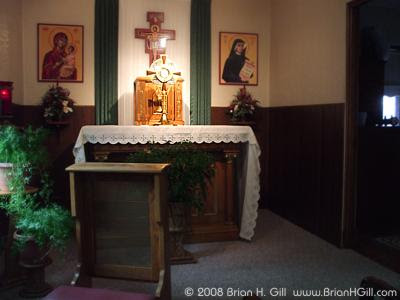 I think spending time before the Blessed Sacrament is time well-spent. I arrived at about 2:40, and three others arrived before 3:00. That doesn't sound like much, but Sauk Centre is home to about 4,000 people, and most of us work during the day.

The point is that, besides writing, talking to people, and doing the usual pre-election things, I think it's important to pray. For a clear head, if nothing else.

Thank you, CaptainCatholic587. I'm in the process of dusting this off for A Catholic Citizen's 'Brendan's Island' re-launch.