The Catholic Church: Authoritarian, Which Isn't Necessarily a Bad Thing

The Catholic Church Tells You What You Have to Believe.

There, you have me.

Actually, the church tells what you have to believe if you're going to call yourself Catholic. We're free to leave the church. I don't think that's the smartest move (John 6:67-69), but any of us can.

The Catholic church is a hierarchical organization, with definite top-down authority. A democracy, it isn't.

But that isn't necessarily a bad thing. Everybody, the Pope included, operates under a set of rules. One of the rules is that what we believe isn't determined by market research or opinion polls.


Churches, the Bible, and Roll-Your-Own Doctrines

I think it's great for people to be interested in the Bible, and read it. But I also think that people can be 'inspired' to believe the darnedest things, when they rely sole on the Bible, their own experiences, and the culture they grew up in.

Here's something I saw at the grocery this week. Amazing. 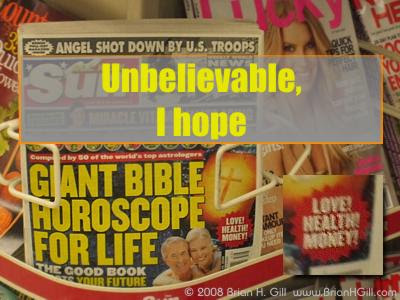 I know: this is a supermarket tabloid, not what some Christian leader said. But Christian leaders have been known to come up with some interesting ideas, too. The founder of Tony Alamo Christian Ministries seems to think that the age of consent is puberty. Which may explain why he's in trouble with the law.

Or, his legal problems may be a Popish plot. CNN quotes Tony Alamo:


" 'We don't go into pornography; nobody in the church is into that,' Alamo said. 'Where do these allegations stem from? The anti-Christ government. The Catholics don't like me because I have cut their congregation in half. They hate true Christianity.' " ("Evangelist Tony Alamo won't fight extradition"
(CNN (September 26, 2008))

(By the way: Even though the Catholic church allows Bingo, horoscopes are on the don't-do-it list (Catechism, 2116). It's part of the ban on divination.)

Listening to people from "Bible-believing" churches describe how they relied on the Bible alone, I learned that many of those churches have a more-or-less formal custom of having some of the more senior members talk over scripture from time to time, and decide what it says.

I'm not being disrespectful with that description: just trying to describe the process briefly. It's a pretty good system, and can filter out the crazier ideas before they get presented as 'Bible truths.'

The Catholic church relies on the Bible, and can't change what it's been given. But we're not left to decide for ourselves what the census reports, songs, and accounts mean. We rely on the Bible, the Magisterium, and Tradition.

There's quite a lot more, at the USCCB website.

Back to Contents
Posted by Brian H. Gill