The Internet as "a Gift From God" 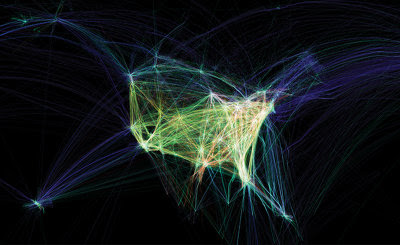 (Lars Jenssen, via Wired, used w/o permission.)
(A frame from "Flight Patterns:" 24 hours of airplane tracking data provided by the Federal Aviation Administration.)

Television and the telephone were destroying civilization when I was in high school. Teens didn't communicate any more, overwrought experts said. They'd spend hours a day, talking on the telephone: when they weren't watching television.

These day's it's texting and the Internet, but the attitude is the same.

Fear of newfangled technology is nothing new. Plato wrote Phaedrus, one of his dialogues, about two dozen centuries back. In Phaedrus, Socrates warns an Athenian aristocrat that widespread use of writing could mean the end of civilization as he knew it.

I haven't learned to memorize poems and lists the way Socrates probably did. In that sense, I don't have the sort of understanding that the Greek philosopher possessed.

On the other hand, I can read about what Socrates said because Plato wrote that dialog. Despite Socrates' warning, ancient Greeks started using the information storage and retrieval technology we call writing.


Nuggets of Wisdom, Mountains of Gibberish

In large part because writing caught on, I've got access to several thousand years of accumulated wisdom. I've also learned how to separate nuggets of wisdom from mountains of gibberish. Just as spoken words don't necessarily express truth and beauty, preserving ideas in writing doesn't guarantee their value.

Like any other tool, folks can use writing to help or hurt others. That doesn't make writing good or bad. It's how we use it. The same goes for all science and technology. (Catechism of the Catholic Church, 2292-2294)

The Pope said something on Friday about how we use Information Age technology. Some of what he said sounds like the same old attitude toward newfangled ideas:


"...The speed with which information is communicated exceeds our capacity for reflection and judgement, and this does not make for more balanced and proper forms of self-expression. The variety of opinions being aired can be seen as helpful, but it also enables people to barricade themselves behind sources of information which only confirm their own wishes and ideas, or political and economic interests...."
("Communication at the Service of an Authentic Culture of Encounter," Pope Francis (January 24, 2014))

I don't feel overwhelmed by the flood of information that's available today. The Internet finally made it possible for me to get at resources fast enough to satisfy my thirst for knowledge.

Not everybody feels that way. My son recently told me that I'm the only person he knows who learns just for the sake of learning.


"...In a world like this, media can help us to feel closer to one another ... The internet, in particular, offers immense possibilities for encounter and solidarity. This is something truly good, a gift from God...."
("Communication at the Service of an Authentic Culture of Encounter," Pope Francis (January 24, 2014))

Doing Good: or Not

Getting back to what Pope Francis said, I could exceed my "capacity for reflection and judgment," or join the folks who "barricade themselves behind sources ... which only confirm their own wishes or ideas...."

That won't happen if all I read is what the 'correct' people write. In a way, I prefer contemporary hostility toward Catholicism to clueless acceptance, and that's almost another topic. (November 18, 2010)

Like any other tool, folks can use social media to do good: or not.


"...The world of communications can help us either to expand our knowledge or to lose our bearings. The desire for digital connectivity can have the effect of isolating us from our neighbours, from those closest to us. We should not overlook the fact that those who for whatever reason lack access to social media run the risk of being left behind.

While these drawbacks are real, they do not justify rejecting social media; rather, they remind us that communication is ultimately a human rather than technological achievement...."
("Communication at the Service of an Authentic Culture of Encounter," Pope Francis (January 24, 2014))

I think the principle behind netiquette is in that last sentence: "...communication is ultimately a human rather than a technological achievement...." Remembering, or learning, that folks on the other end of a connection are "real" people is a start. My opinion.

"...People only express themselves fully when they are not merely tolerated, but know that they are truly accepted...."

"...Communication is really about realizing that we are all human beings, children of God...."
("Communication at the Service of an Authentic Culture of Encounter," Pope Francis (January 24, 2014))

And that's another topic. 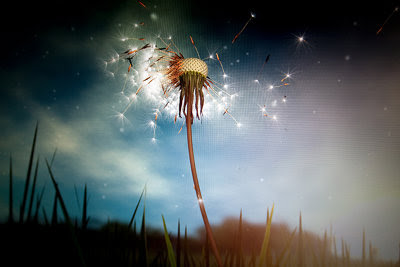 This is a great post Brian. And, I agree with the points you make. I, like you, strive to be holy and also to stay connected with real people. I think that many are having difficulty acclimating to this digital age. From personal experience, it is easy to see (or not see!) the person at the other end of the digital communication as a faceless formless being; remembering that they are real people takes thought and effort.

And thanks for the encouragement to keep writing.

I post something here twice a week, on Friday and Sunday: plus the occasional 'extra' item.

Um. Noted. You're right, although I did intend the possessive form. Changed, and thanks.