Our Lady of Guadalupe: Empress of the Americas

Or, 'long live Our Lady of Guadalupe!'1

As I wrote in a previous post, Mary is a pretty big deal for many Catholics.

America, Churches, and Our Lady of Guadalupe

Devotion to the Virgin Mary isn't worship, but I can see how people in America might get that idea.

There's a tradition in some American styles of church design to make the sanctuary a sort of sensory-deprivation chamber: White walls, white ceiling, as little embellishment as possible.

Now and again there'll be a Catholic church where, maybe in a effort to 'fit in,' the same approach is taken.

Generally, though, the inside of a Catholic church isn't particularly bland. 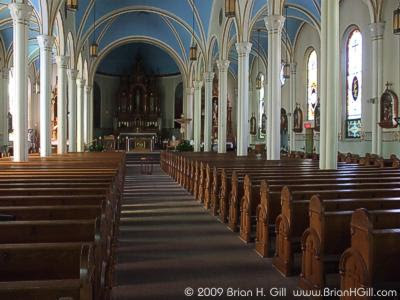 On the other hand, we do accommodate local cultures and customs. Look carefully in that photo of St. Mary's sanctuary, and you'll see a good old American "EXIT" sign. 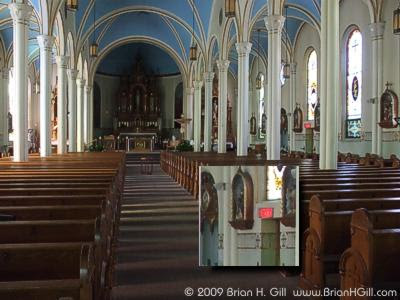 This Church of St. Mary is in Melrose, about 10 miles down the road. If you sit in the very front row and look to your right, you'll see a niche, between two stations of the cross: 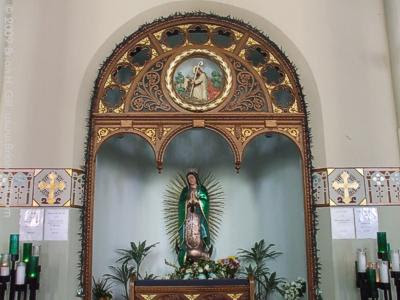 Shrine: Our Lady of Guadalupe. 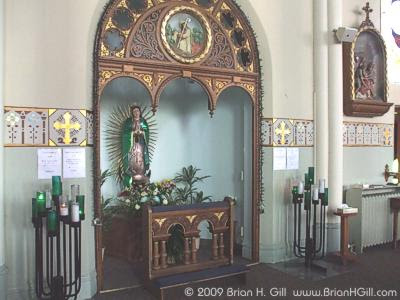 Our Lady of Guadalupe, between 'Jesus carries the cross' and 'Jesus falls for the first time' - in central Minnesota?!

That Our Lady of Guadalupe shrine is newer than the Melrose church. I haven't confirmed this, but my understanding is that the shrine was built when Hispanic families started moving to this area.

Devotion to Our Lady of Guadalupe is a Hispanic Thing, Right?

Pope Piux XII declared Our Lady to be Patroness of the Americas in 1946, so I don't think it's that much of a stretch to think that anybody living in the Americas can have a devotion to Our Lady of Guadalupe.

We call the man who made an out-of-season flower delivery Juan Diego - and that is his name. Part of it, anyway. When Cuauhtlatoatzin ("speaking eagle") was baptized, he received the Christian name Juan Diego. I'll admit that it's easier - by far - for me to say "Juan Diego" than "Cuauhtlatoatzin," so I'll stick to that part of his name in this post.

You may be familiar with the account of Our Lady of Guadalupe. There's a pretty good re-telling on the sancta.org website. Very briefly, Juan Diego met and talked with Mary on a hill northwest of today's Mexico City. The hill's called Tepeyac. She wanted a church built on the site, and had Juan Diego act as a messenger, taking her request to the local bishop. So far, aside from the rank of the person making the request, just another item in the workings of the Catholic Church.

The bishop didn't believe Juan Diego. I can't say that I blame him. Most bishops go through their entire careers without getting messages direct from Our Lady. The bishop asked for a sign.

Juan Diego came back with an assortment of roses - and an image on his tilma. The image, and the tilma, are still around: which is a bit odd, since that sort of cactus-cloth deteriorates in about 20 years. Juan Diego acted as go-between for the bishop and Our Lady in 1531. You do the math.

The bishop built the church.

"Empress of the Americas"?

Almost 478 years after that bishop got that assortment of roses, almost 22,000 people got together in Glendale's Jobing.com Arena. It's not a particularly 'spiritual' place. Incubus, Pink and the Ting Tings, and the Jonas Brothers are slated to be there this month, too.

But, it's got the seating capacity that the event organizers needed.

There's a pretty good writeup of last week's Our Lady of Guadalupe festival in The Catholic Sun:

"The event was hosted by the Knights of Columbus and followed their two-and-a-half day Marian Congress. During the festival, Supreme Knight Carl Anderson reflected on the unparalleled influence Our Lady of Guadalupe has had on the Americas.

" 'Your presence here today is a testament to the power of the message of love that Our Lady brought to this hemisphere,' Anderson told the crowd. 'Our Lady of Guadalupe is the Empress of the Americas. She calls all of us to unity within the Gospel message of her Son.'..."
The Catholic Sun

In context, the Supreme Knight calling Our Lady of Guadalupe "Empress of the Americas" makes good sense: and isn't part of a popish plot to overthrow the Anglo-Saxon States of America.

I think it highlights a sort of cultural gap between Catholics and 'real Americans.' At least since the days of Thomas Nast and Maria Monk, Catholics have been regarded as strange and, well, un-American.

We're not as scary as you might think. Stories about Jesuit Assassins, although colorful and dramatic, aren't an accurate reflection of the Catholic Church. We're even required to be good citizens. (September 24, 2008)

As a Catholic, however, I'm part of a group that's almost two thousand years old, spans the globe, has seen nations and empires rise and fall, and today numbers somewhere upwards of 1,000,000,000 people.

For someone whose highest allegiance is to a 233-year-old country with a population a little over 307,000,000 - that could be scary.

But, terms like "Empress of the Americas" notwithstanding, we're really not a threat to the United States government. As I said, we're required to be good citizens.

Vaguely related posts: Background: In the news: Hats off to thecatholicsun, on Twitter, for the heads-up on their article.
Posted by Brian H. Gill